In 1998, when online journals were in their infancy, Geoff Chapple was one of the first to walk Te Araroa. He took one of the earliest digital cameras, a laptop and a mobile phone and posted stories of his journey.

In the decades since, many other Te Araroa walkers have also recorded and shared their journeys. Their stories give us a powerful insight into Te Araroa and New Zealand.

Not all who walk Te Araroa describe their adventure online, but those who do leave a vivid record. These are their stories. 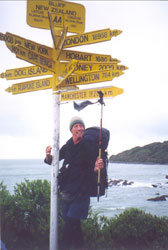 Geoff Chapple — one of our great Kiwis — picked up the concept that had previously floated around without real traction.
What followed was an 18-year labour of love to turn Te Araroa into reality, picking up many willing contributors along the way.

To bring Te Araroa to life, Geoff walked New Zealand himself — covering the North Island in 1998, then the South Island in 2002.

Geoff wrote extensively about Te Araroa, first releasing a publication in 2002, Te Araroa: The New Zealand Trail (One Man Walks His Dream), then in 2011, Te Araroa: A Walking Guide to New Zealand’s Long Trail. Geoff also kept a blog of his walking expeditions and, in 2001, produced a study of international long walking trails as part of a Churchill Fellowship. 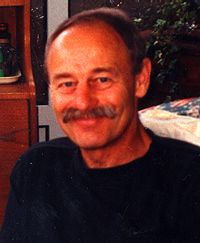 The last New Zealand long walker we know of is George Spearing.

George Spearing took early retirement from the Fire Department — the Devonport Fire Station, actually — and decided to look at the North Island. He’d already walked the 4,000 km Pacific Crest Trail along the Sierra Nevada Range in America. His North Island route, mainly off-road, started at the northernmost point, Surville Cliffs, and ended at its southernmost, Cape Palliser. He took 73 days — from 24 November 1996 — 5 February 1997.

George firmly closed the door of his Whangaparaoa home to begin his long hike and dislodged the lucky horseshoe. He set out donged and bleeding, was almost washed off Te Horo Beach Headland but got to Cape Reinga, then walked 90-Mile Beach to Ahipara. He was bitten by wild dogs just beyond that town, but kept beach-walking down the western coast, kayaked across the Hokianga and Kaipara Harbours, and went on through Woodhill Forest to Muriwai and the Waitakere Ranges. He kayaked across the Manukau Harbour to Papakura, tramped the Hunua Range to Kopu, then Paeroa and entered the Karangahake Gorge. He followed bush tracks in the Kaimai-Mamaku Range, then exited the Carter Holt Harvey forestry roads that led through Taupo. He road-walked SH1 to the Kaimanawa Range, then entered the Ruahines. Lousy weather closed in, and strong winds lifted him off his feet, but he made it out, crossed farmland to Ashhurst, road-walked to Shannon, then traversed the Tararuas, linked with the Rimutaka Incline trail, road-walked to Lake Ferry, then round the coast to Cape Palliser.

A good walk! But different from Te Araroa — exclusively, as ours is not, a coastal, bush, and mountain range trail. “Did I enjoy my walk?” he says. “I must honestly say that I did not.” He found it “a slog, really”, with too few enjoyable moments. George — you gotta road-test Te Araroa sometime! 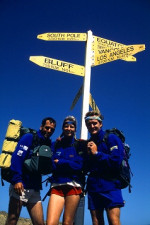 In 1995, Chris Gulley and two friends, Ron Enzler and Wendy van den Berg undertook the Te Araroa Expedition from Cape Reinga to Bluff to “promote the potential of an end-to-end trail of Aotearoa / New Zealand”. Originally planned as the Aotearoa Adventure Trail, the newly formed Te Araroa Trust asked the trio to join forces with them.

Chris had, in 1992, walked the entire Appalachian Trail in the USA and came back home with the same vision for New Zealand. The journey was undertaken on foot, by mountain bike and by sea kayak — the thinking being that these alternative forms of self-propelled transport would add some ‘spice’ to the trail and could be offered as alternatives to walking (and, in turn, employ local operators).

The trio started in February 1995 and reached Bluff in May 1995, just after the first snows of the winter. They covered roughly 3,000 km — with a third of each on foot, bike and kayak. 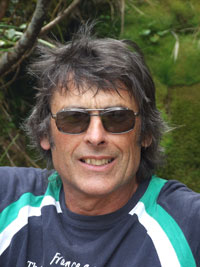 In 1983/84, Rex Hendry walked from the top to bottom of New Zealand through the bush – a little under 3000 km in 168 days. The route explored the possibility of a North-South Walkway through the country and stuck closely to the mountainous geological fault line that runs the country’s length. A smelly old tramper from way back, Rex Hendry returned to New Zealand in the early 1980s after studying and working in Outdoor Education in UK and Europe. This journey provides a real link between theory and practice!!

He has written an account of the journey. It is a ‘first draft’ written a few months after the trip in 1983/84. The temptation to re-write it and ‘tart it up’ with exciting expletives and dripping metaphors has been resisted. The written word follows this intrepid trek and relays the actual characteristics of the journey – rough, raw, tenacious, and at times tedious. It is an authentic account interpreted from the pages of his logbook, with a foreword by Graeme Dingle MBE ONZM.

There may have been other hikes — but the first one everyone knew about was when AH Reed, then aged 85, walked the length of New Zealand between 22 September 1960 and 12 April 1961. The old man — founder of AH and AW Reed Publishing — walked on-road the whole way.

But, in his book From North Cape to Bluff (AH and AW Reed, 1961), AH explains the journey “Yes, I knew I wanted to travel leisurely on foot through the whole length of our favoured land...”  AH that’s it — you had Te Araroa spirit! The octogenarian did the North Island half in 86 days. In the 1960s, the nation enjoyed surfing a single emotion — the Beatles, right? and it got right behind AH.

The 85-year-old’s journey entered New Zealand’s heart. People clapped him through, brought him cups of tea, waved and tooted from cars, and screeched to a halt by the entire busload. And along the route, class after class of school-children were gathered for compulsory but unforgettable immersion in the eerie spell cast by this old, gaunt giant of early hiking. The first person recorded walking the length of New Zealand was the indomitable Esther James, architect, inventor and fashion model. During 1931 and 1932, James walked 2500km from Spirits Bay to Bluff through New Zealand towns and communities. She worked for the New Zealand Manufacturers’ Federation promoting buying New Zealand-made goods during the depression. During the walk, she wore NZ-made clothes to focus the nation’s attention on the value of buying NZ-made.

Being the first person to walk the length of New Zealand was just one of James’ adventures.  She also completed other long walks and spent time in Australia diving for coral, crocodile hunting and opal mining. She wrote a bestselling book, stood for parliament, designed and built houses and ran several businesses.

Donations help make Te Araroa one of the greatest walks in the world. 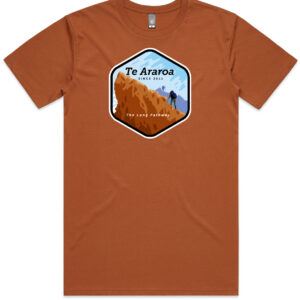